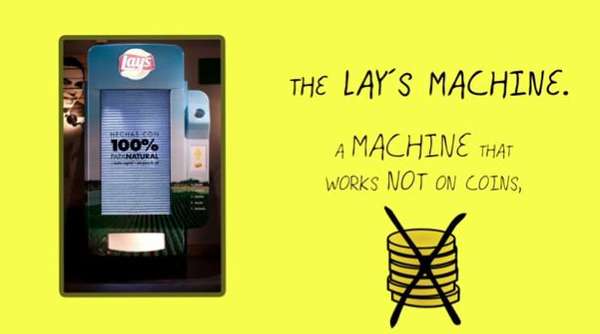 Lay's Argentina Invites Users to Make Their Own Chips

Katherinev123 — September 20, 2011 — Marketing
References: adage & popsop
Share on Facebook Share on Twitter Share on LinkedIn Share on Pinterest
Soon, a vending machine in a Buenos Aires supermarket will allow people to drop in a potato—instead of a coin—to create their own bag of Pepsico Lay’s chips. This innovative campaign for Lay’s Argentina is all about showing consumers how chips are made, merging “sampling with storytelling,” as Ad Age puts it.

The Lay’s Argentina vending machine comprises a series of tubes, as well as flames and boiling water, to show the user the series of steps—from peeling to packaging—a potato goes through to result in a bag of chips. Unfortunately, the actual conversion of the user’s hard-earned potato into a bag of Lay’s chips isn’t real; the vending machine just displays a video showing the process (although it’s a very realistic video).

Nevertheless, this campaign, created by BBDO, is still an innovative one. And, according to Alfredo Della Savia, PepsiCo ConoSur’s brand manager, it helps to fight the recent rumors that Lay’s chips aren’t made of real potatos. What people think they’re actually made from, I have no idea.
3.6
Score
Popularity
Activity
Freshness
Get Trend Hunter Dashboard