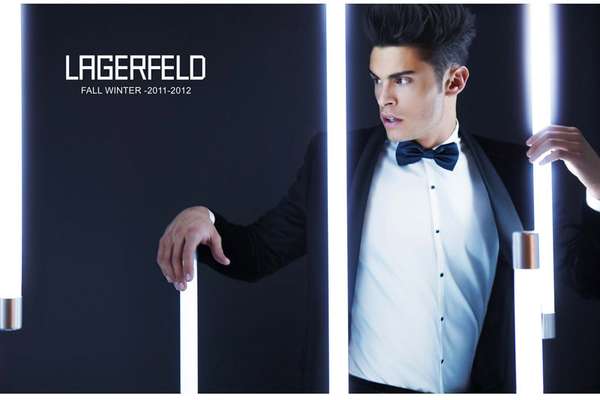 Marissa Brassfield — May 29, 2011 — Fashion
References: karllagerfeld & thefashionisto
Share on Facebook Share on Twitter Share on LinkedIn Share on Pinterest
Karl Lagerfeld's muse Baptiste Giabiconi stars in the lookbook for the Lagerfeld Fall/Winter 2011 collection blending the best of guido confidence and gentlemanly aesthetics. Rocking a Pauly D blowout and a series of somber suits, fur-trimmed blazers, leather, pinstripes, sweaters and puffy coats, Giabiconi proves that it's possible to add even more panache to the modern image of the well-manicured man.

Like many of the kaiser's previous collections, the Lagerfeld Fall/Winter 2011 collection features closely tailored separates in a largely muted palette of black, gray and white. This season's line adds a bit of royal purple and blood red to the mix. My favorite image, however, is the first one, in which Giabiconi's flawless complexion and icy stare is set off by cylindrical lights.
5.3
Score
Popularity
Activity
Freshness
Get the 2021 Trend Report FREE