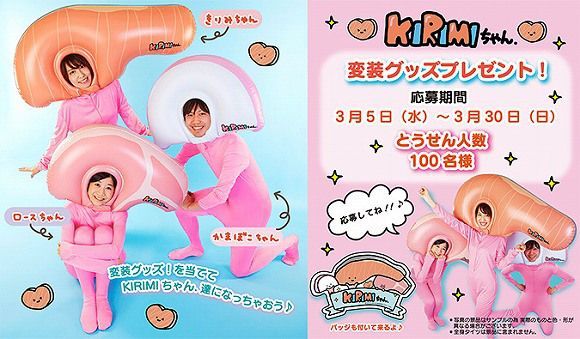 Laura McQuarrie — March 12, 2014 — Life-Stages
References: sanrio.co.jp & en.rocketnews24
Share on Facebook Share on Twitter Share on LinkedIn Share on Pinterest
Among Sanrio's cute assortment of mascots is Kirimi, a relatively new an rather unusual character who is an animated filet of salmon. Sanrio describes that the backstory for this quirky character is that "she achieved sentience after being sliced off of a whole fish."

Alike Hello Kitty, Kirimi-chan is being turned into all sorts of products, including this inflatable salmon filet costume headpiece. Since Kirimi is so new, Sanrio is stirring up some hype for the adorable salmon filet by giving away 100 of these costumes until the end of March.

The giveaway also includes some of Kirimi's friends, like Kamaboko the fish sausage slice and Rosu, the cut pork sirloin. With these exclusive, wacky costumes, you definitely won't have to worry about someone else dressing up as the same thing on Halloween.
5.3
Score
Popularity
Activity
Freshness
Get Trend Hunter Dashboard