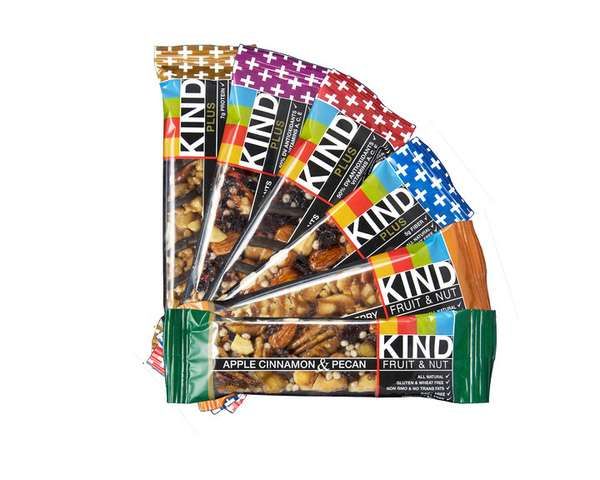 Tiana Reid — August 17, 2011 — Social Good
References: kindsnacks & facebook
Share on Facebook Share on Twitter Share on LinkedIn Share on Pinterest
KIND will make kindaholics out of people. You could even say that getting people addicted to kindness is one of the company's main goals. Many people wholly believe in kindness and strive to be kinder than our busy schedules and stressed psyches allow. All the same, that’s what makes KIND -- as a brand -- so genius. Kindness is a universal value.

As expected, “holistic kindness” is one of the basic principles that guides the company's daily and long-term goals. KIND was founded in 2003 by social entrepreneur Daniel Lubetzky who had previously founded PeaceWorks Foods, which he defined according to his own buzz term, as a “not-only-for-profit” company. KIND follows along in the same vein and considers the environmental, social and economic bottom lines when doing business.

KIND holds monthly KINDING missions, which according to their lighthearted glossary means “to do an unexpected act of kindness for someone else.” These are typically small and doable acts; for instance, the last KINDING mission involved more than 10, 000 people giving a cold drink to someone who works outdoors in their community. Depending on the reactions to these missions, KIND will carry out a large-scale giving initiative using its resources to make it a success. The last BIG KIND act, which was a partnership with Denver’s Whole Foods and the Colorado Coalition for the Homeless, involved delivering school supplies to homeless children.

KIND offers a wide variety of products that are categorized into three basic, but marketable, categories: traditional fruit and nut bars; mini bars that are about 100 calories a pop; and bars with added nutritional value like antioxidants and vitamins. KIND is currently available in health food stores all over the United States including larger and more corporate food stores like Starbucks and Whole Foods.

On the KIND Facebook page, there are photos of random acts of kindness -- delivered from celebrities to neighbors -- which all together create the KIND Movement aims to inspire a better world. All in all, a social business, or as KIND themselves calls it, a movement, that asks people to “be kind” is a much more noble and complex goal than it seems but KIND shows that small acts are sometimes just as important as large-scale initiatives.