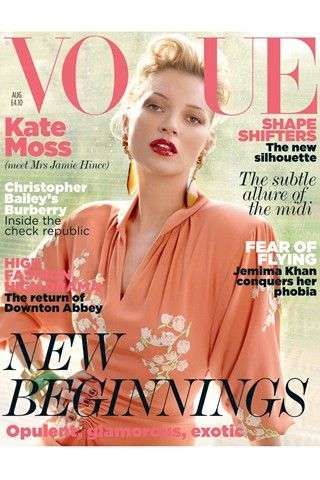 Corinne Guirgis — July 5, 2011 — Fashion
References: vogue & fashionista
Share on Facebook Share on Twitter Share on LinkedIn Share on Pinterest
This summer’s international Vogue editorials have Kate Moss written all over them, and the Kate Moss August 2011 Vogue UK cover shoot is the newest addition to the supermodel’s growing collection of hot, high-fashion spreads. In fashion, shooting for the cover of Vogue as frequently as Moss is like winning the UFC championship belt and successfully defending it five times over.

Lensed by photographer and longtime friend Mario Testino, the supermodel captures the elegance of a forties film fashionista dressed in Miu Miu, Dior and Diane Von Furstenberg. The new Mrs. Hince, whose recent nuptials are the talk of the town, will also be covering the September 2011 issue of Vogue US, after already appearing as the cover model of the May Vogue Brazil, June Vogue Paris and several others.

Implications - While the success and buzz that surrounds certain fashion models is restricted to a limited time frame, the names and faces of celebrated supermodels are not only timeless, but their iconic status continues to grow with time. Further, as their celebrity status increases, their careers are further fueled by their personal lives, and models whose personal lives receive significant news coverage are more frequently featured in popular editorials.
5.2
Score
Popularity
Activity
Freshness
View Innovation Webinars