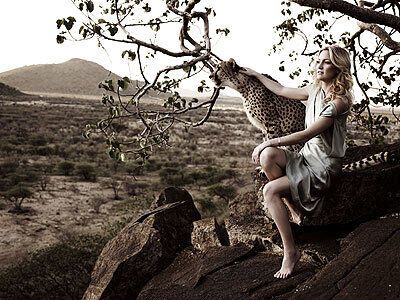 Bianca — March 31, 2008 — Eco
References: wildaid.org & people
Share on Facebook Share on Twitter Share on LinkedIn Share on Pinterest
Kate Hudson is widely known for her natural ways, from her boho style of dressing to the environmental causes she supports. Most recently she's supported WildAid in a project which saw her team with her long time hair stylist, David Babaii, to launch an eco-friendly haircare line.

Hudson will donate 10 per cent of the proceeds to the foundation which aims to end the illegal trade of wild animals. In the African photo shoot for the ad campaign, shot by Peter Lindbergh, the young starlet posed with exotic animals like cheetahs and lion cubs.

"I really have a thing about natural product," she said. "It's very difficult to make things that are completely organic and sustainable. David and I got so excited about making something like that. Making something conscious and making it good."

"We have a blast together," she said of her stylist. "I'm just lucky to have him as my companion while I travel and work."

Kate, who is Goldie Hawn's daughter, said her favourite animal to work with was the cheetah.

"He was purring," she said. "I remember listening to it and [asking], 'Should I be running right now because his purr sounds more like a growl?' But they're like, 'No. He's just super happy.' And I got really comfortable with it. And I would literally lay on the cheetah. It was really pretty cool."

She liked the lions too though.

"Even though they're babies, they are lions. They were very sweet. I would put them on their back and rub their tummy. And they would love it!"