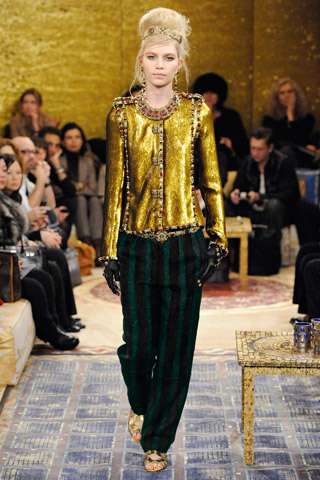 Byzantine Fragments is an Haute Piece of Literature About Karl Lagerfeld

Sarah JA — April 22, 2011 — Luxury
References: colette.fr & style
Share on Facebook Share on Twitter Share on LinkedIn Share on Pinterest
Whats the latest must-have luxury item? A couture coffee-table book by fashion designer and icon Karl Lagerfeld called Byzantine Fragments. The 52-page wonder is a collection of Karl Lagerfeld’s photographs of the Bysantine mosaics in the Basilica di San Vitale in Ravenna, and was conceived in connection to his pre-fall 2010 Paris-Byzance collection for Chanel. Reflecting the luxury it depicts, the photos in Karl Lagerfeld's Byzantine Fragments are printed on ivory parchment while the title page is of indigo tracing paper with gold lettering.

Lagerfeld is known for his love of luxury and traditional crafts. He is, after all, said to have singlehandedly saved the art of couture in France. As if to remind fashionistas of the importance of traditional handcraft and its synonymy with couture, each of Karl Lagerfeld’s luxury books is hand-stitched with umber thread and housed in an embossed gold slipcase.