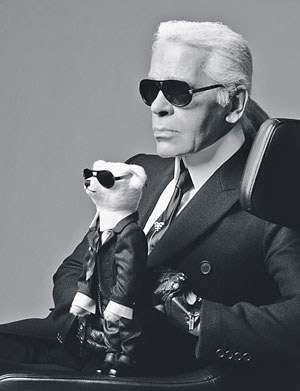 Going Like Sixty — January 17, 2009 — Marketing
References: nymag
Share on Facebook Share on Twitter Share on LinkedIn Share on Pinterest
I am pleased to announce today that the final arbiter of what is fashionable, Karl Lagerfeld, has confirmed what was reported earlier on Trend Hunter TV: Bling is dead. Over 100 blinged-out items have been featured on Trend Hunter in just a couple of years. Lagerfeld told the New York Times that crystals, sequins, rhinestones, and all that is glittery is done.

Karl Lagerfeld says that until the world economy gets back on the right track, designers should stop with the extravagance. He said the economic crisis is a “moral and physical housecleaning” and that bling should be stopped.

However, the economy won’t deter Lagerfeld. He said he has no limits by the company’s owners to change because of the economy. “We have no budget, we do what we want and throwing money out the window brings money back in through the front door,” Lagerfeld bragged. “The bottom line is that I don’t deal with the bottom line. The luxury in my life is I never have to think about it.” Attaboy Karl, keep hope alive.
2
Score
Popularity
Activity
Freshness
Get Trend Hunter Dashboard