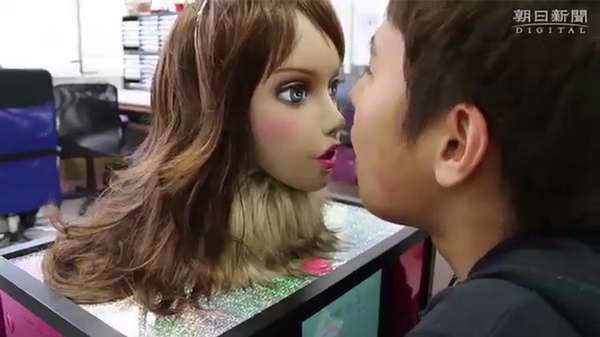 Meghan Young — May 9, 2013 — Tech
References: ajw.asahi & theverge
Share on Facebook Share on Twitter Share on LinkedIn Share on Pinterest
Being told by a pretty girl that one's breath is not up to par may be embarrassing in real life scenarios, but the Kaori Robot takes the sting out of such rude remarks. The dark-haired, blue-eyed beauty, who looks almost like an anime character come to life, manages to deliver the news in a way that is more entertaining than devastating. That is because the Kaori Robot is, well, a robot.

Built by researchers in Fukuoka, Japan, who were led by Kennosuke Tsutsumi, the mastermind behind the Kaori Robot and president of CrazyLabo, she responds with one of four ratings such as "sweet and sour, smells good!" and "we have an emergency." Made in collaboration with Kitakyushu National College of Technology, the Kaori Robot is accompanied by a robot dog that judges smelly feet.
4.8
Score
Popularity
Activity
Freshness
View Innovation Webinars