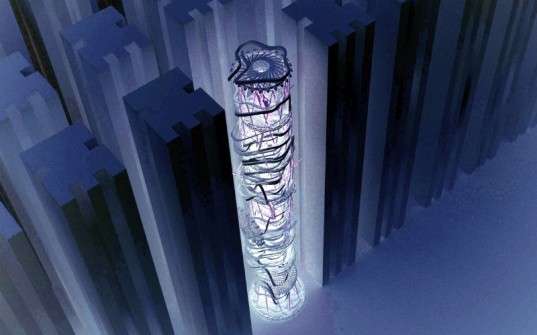 Jordan M — January 7, 2011 — Life-Stages
References: juhyunkim & archdaily
Ju-Hyun Kim has big plans to bring all the excitement and attractions of a full-fledged theme park to the tight confines of a downtown urban environment. Indeed, his Vertical Theme Park may sound like something out of a futuristic movie, but his detailed design concept suggests that it might not actually be that long until expansive amusement complexes stretching over huge tracts of land are nothing more than a distant memory.

The essential appeal of his idea is that, fundamentally, it makes sense. One of the largest disadvantages of large parks is the vast amount of space they require and this usually means that they must be constructed well away from dense cities where property values are far too high to give them a chance at being profitable. With this in mind, Ju-Hyun Kim's design stacks the park vertically rather than stretching it out horizontally, so that this key setback is all but circumvented, resulting in a downtown super park that can benefit from the dense urban population of local customers literally on its doorstep.
2.1
Score
Popularity
Activity
Freshness