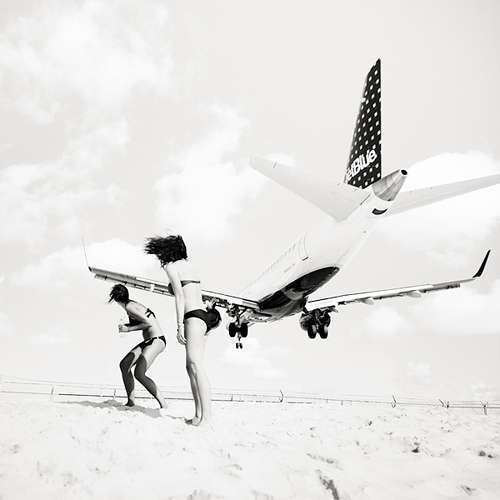 Sophia Pelka — March 28, 2012 — Art & Design
References: josefhoflehner & english.mashkulture.net
Share on Facebook Share on Twitter Share on LinkedIn Share on Pinterest
Josef Hoflehner's collection 'Jet Airliner' is haunting and reminiscent of vintage horror films. The photographer lenses live action, wide angle shots of planes arriving and departing from the Princess Juliana International Airport in St. Maarten, Dutch West Indies. The planes come shockingly close to the beach and the hoards of tourists sunbathing and splashing around in the water. The complete tranquility of the beach scenery is harshly juxtaposed with the beastly machines. The giant jet airliners create a monstrous, bone chilling shadow, which would you would think would cause more chaos than if someone screamed 'Shark!' However, the beach dwellers stay calm, merely taking their own snapshots of the striking contraption.

Josef Hoflehner is an Australian-based photographer. He was recognized as the Nature Photographer of the Year in 2007 and was a Lucie Award Nominee. He has done commissioned work for AT&T, Gap, Polo Ralph Lauren and many more.