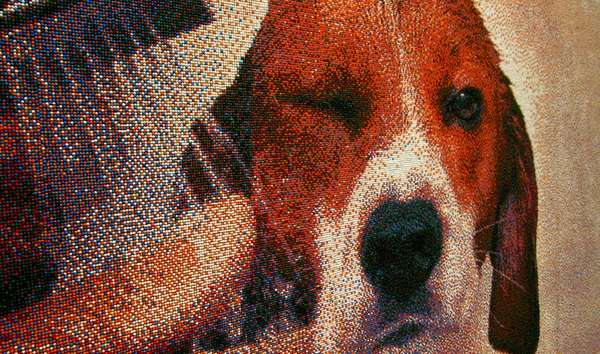 Joel Brochu Created a Portrait of a Beagle Using Nonpareils

Meghan Young — November 21, 2011 — Lifestyle
References: artstormer & mymodernmet
Share on Facebook Share on Twitter Share on LinkedIn Share on Pinterest
The art technique known as pointillism is impressive on its own, but student Joel Brochu has decided to take it to a whole new otherworldly level. Pretty much the opposite of pixelation, pointillism is used to create paintings through a series of strategically repeated tiny dots. Joel Brochu believed that he could recreate this art form using different materials. After first experimenting with M&Ms, he decided to get even smaller; that is when Joel Brochu stumbled upon nonpareils at a local bakery.

Nonpareils are essentially tiny ball sprinkles used to decorate cakes. Joel Brochu used these colorful sprinkles to recreate a photographed portrait of a beagle. Wanting to "wow" people, as he puts it so eloquently, Joel Brochu definitely did that, using 221,184 nonpareils in the process.
4.7
Score
Popularity
Activity
Freshness
View Innovation Webinars