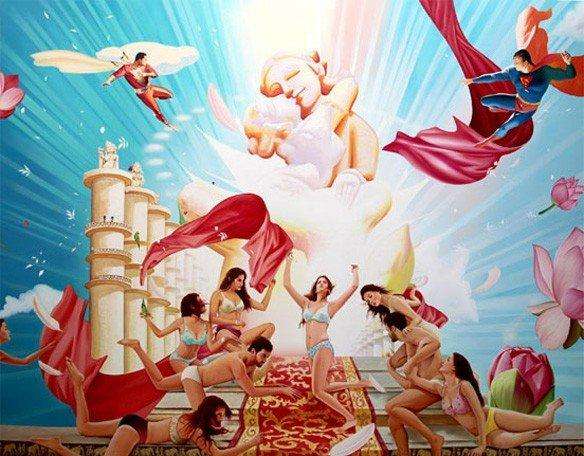 Wesley Grant — March 25, 2011 — Marketing
References: naturemorte & comicsalliance
Have you ever seen superman save the day in the context of safe sex? Well, the works by Jiten Thukral & Sumir Tagra from India encapsulate him doing so as part of a riveting safe sex campaign.

What’s crazy, is that these artworks by Jiten Thukral & Sumir Tagra portray Superman as a giant condom metaphor. Looking at the paintings make you want to know more -- if you’re serious about an aids-free generation. From religious symbolism to a prism of bright and beautiful colors that infuses a heavenly spectacle with multiple superheroes and sexy ladies, the works by Thukral and Tagra’s prompt open and frank discussion about sex and the transmission of diseases among youth. However, there is some controversy about the effectiveness of the campaign.

You can't help but wonder, does Superman indulge in safe-sex practices or not? And did Thukral and Tagra misunderstand the nature of superhero costumes? You decide.
3
Score
Popularity
Activity
Freshness