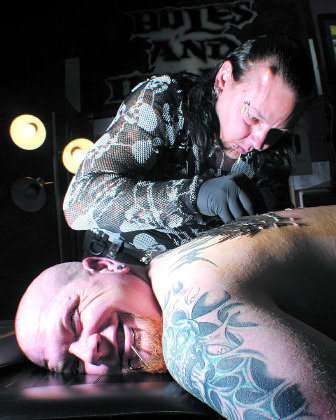 Jeremy Stroud Gets 1,197 Piercings in One Day

Going Like Sixty — May 12, 2009 — Lifestyle
References: star-telegram
Share on Facebook Share on Twitter Share on LinkedIn Share on Pinterest
Jeremy Stroud fell short of his goal of having 2,000 piercings in one day, but he still set a record with 1,197 piercings. Tyson Turk took five hours to insert 800 needles into Stroud’s back, 300 in his right arm, 20 in his left arm, and 800 needles into his back. The body mods were all removed but he was left with souvenir scars everywhere.

“They’re so close together that they leave a line. It kind of looks like I had stitches from my wrist all the way up to my shoulder,” Jeremy Stroud said.

Facial Piercing All-Stars
The Piercing King Has Over 300 Holes