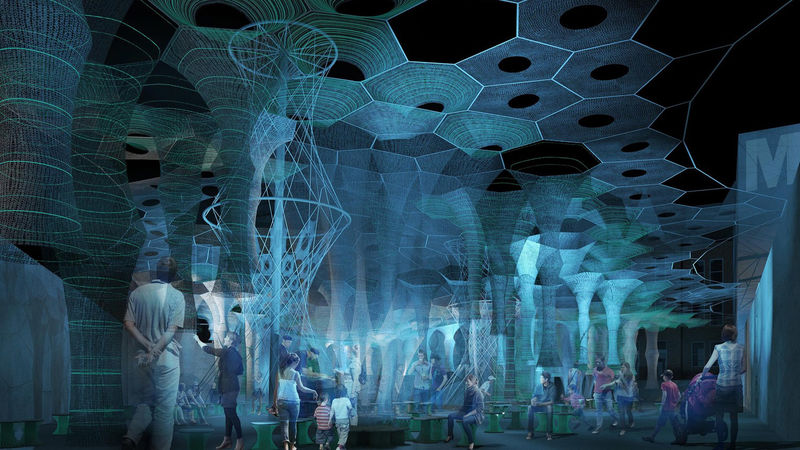 Jenny Sabin Studio's 'Lumen' will be on Display at MoMA PS1

Joey Haar — February 20, 2017 — Art & Design
References: jennysabin & dezeen
Share on Facebook Share on Twitter Share on LinkedIn Share on Pinterest
Jenny Sabin Studio, an architectural design practice based out of New York, has won the Young Architecture Program for MoMA PS1, the annual art, architecture, and design program held in Queens, New York. The winning design, which is called 'Lumen,' comprises a vast canopy of textiles knitted by robots, and these textile themselves are capable of generating energy through solar radiation.

Lumen isn't Jenny Sabin Studio's first attempt at robotically knitted textiles. The studio designed a similar project at Cooper Hewitt, the Smithsonian's design museum in New York. Lumen, however, is the first such project to move beyond aesthetics, with the canopy being made from recycled photoluminescent textiles. The power generated by these textiles will be used to power a misting system that will cool off visitors to the summer exhibit.
4.6
Score
Popularity
Activity
Freshness
Attend Future Festival

Eco-Friendly Festival Structures
The Party Wall is a Monument to a Place, an Event and a Practice
play_circle_filled