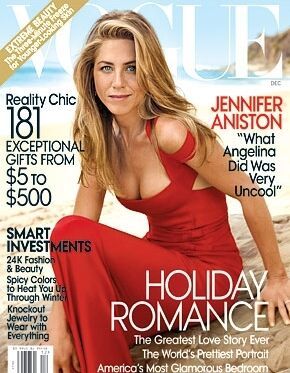 Ayman — November 12, 2008 — Fashion
References: vogue & usmagazine
Share on Facebook Share on Twitter Share on LinkedIn Share on Pinterest
2008 is the year of red. It started with Jennifer Hudson ringing in the new year in a hot body-hugging number, went through Katherine Heigl in a red Frederick M. Brown gown at the 2008 Oscars all the way to Governor Sarah Palin making an appearance in a red suit on SNL. Even the new First lady of the United States, Michelle Obama, chose a striking black and red Narciso Rodriguez dress from the Spring 2009 collection on election night.

And you know, Christmas is around the corner when red invades the covers of fashion magazines. American Vogue leads the way with Jennifer Aniston sparkling in a bright red dress on the cover of the December 2008 issue.

In the accompanying interview, Jennifer Aniston wasn’t in a very jolly Christmas-y mood as she broke her four years of silence about Angelina Jolie by saying, “What Angelina did was very uncool.”

Aniston was referencing Jolie’s recent revelations that she and Brad Pitt fell in love during the shooting of “Mr & Mrs Smith”, while he was still married to Aniston.

Back to the red fixation. Not to be left out, McDonald’s is also getting on the red action with its new black and red themed “Quarter Pounder” store in Japan.