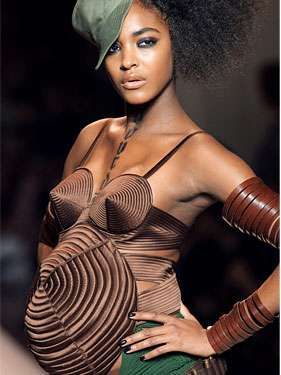 Katherinev123 — October 5, 2009 — Luxury
References: style & nymag
Share on Facebook Share on Twitter Share on LinkedIn Share on Pinterest
When it was first announced that pregnant model Jourdan Dunn was going to walk in the Spring 2010 shows, it was tough to pinpoint exactly what she would be walking in. Loose and billowy empire tops? Some flowing silk robe perhaps? No, I was sorely mistaken; the Jean Paul Gaultier Spring 2010 show released Jourdan Dunn onto the catwalk in brazen bronze padding, featuring cone bra cups and a large tummy dome.

Because it kind of resembled amazonian armour, it worked just fine with the the rest of the Jean Paul Gaultier Spring 2010 collection which took on a warrior theme with combat boots, arm cuffs, and capes.
5.6
Score
Popularity
Activity
Freshness
Get Better and Faster