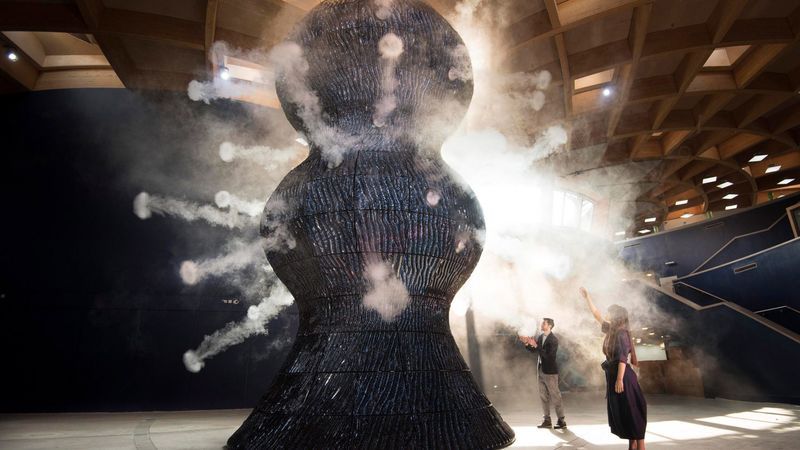 Joey Haar — May 25, 2018 — Art & Design
References: dezeen
Share on Facebook Share on Twitter Share on LinkedIn Share on Pinterest
Cyanobacteria are the smallest living organisms in the world, but for Invisible Worlds, a permanent exhibition opening at London's Eden Project, the microscopic bacteria are humongous. That's because the exhibition's centerpiece sculpture, which was designed by London-based Studio Swine, is inspired by the shape and behavior of those ur beings.

The dimensions for Studio Swine's Invisible World's sculpture is staggering. It measures nine meters tall, weighs 20 tonnes, and is outfitted with 32 vapor cannons. Those cannons shoot out rings of vapor scented with what Studio Swine refers to as "aromas of primordial worlds", as reported in Dezeen.

Invisible Blue, as the sculpture is called, is made almost entirely out of ceramic. With the weight that it has, Studio Swine claims that the sculpture is thus the largest ceramic piece in the world.
2.1
Score
Popularity
Activity
Freshness
Get Better and Faster

Brutalist Lawn Gnomes
The NINO Gnome is an Edgy, Playful Take on the Classic Sculpture