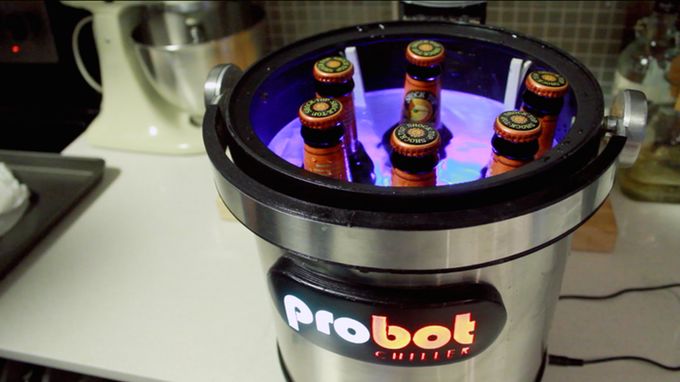 Katherine Pendrill — July 19, 2015 — Tech
References: probotchiller & kickstarter
Share on Facebook Share on Twitter Share on LinkedIn Share on Pinterest
A San Francisco-based company recently launched a Kickstarter campaign for an instant beer chiller that can cool up to six drinks at once. The 'Probot Chiller' is a revolutionary cooler that regulates the temperature of your drinks so you will never have to worry about warm beer again.

The Probot Chiller relies on an insulated ice bath and convective circulation to help your drinks go from warm, to ice cold in just five minutes. The device uses advanced 'Vortex Flow' technology to ensure that each of the drinks is cooled to the exact same temperature. The instant beer chiller can hold up to six cans of beer at a time, making it great for rapidly cooling multiple drinks at once. Beyond beer, the cooler can also hold other beverages such as soda, energy drinks, wine and champagne.

Aside from keeping your drinks at the perfect temperature, the cooler is also equipped with two USB ports that allow you to charge your devices. These ports feature LED illumination so you can even see them in the dark.
6.1
Score
Popularity
Activity
Freshness
Get the 2021 Trend Report FREE