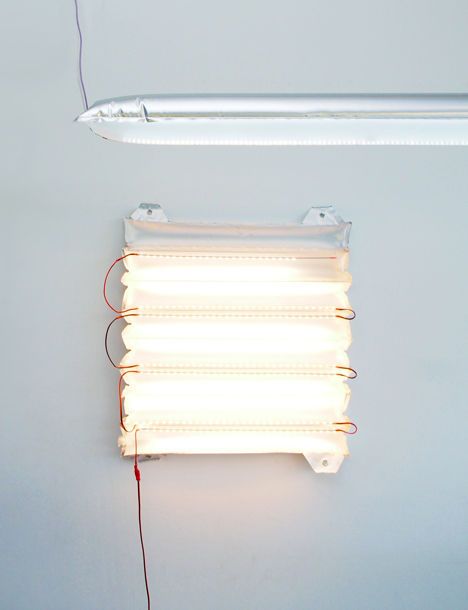 Theo Moller's Inflatable Light Series Can Be Blown Up Like Balloons

Laura McQuarrie — May 2, 2014 — Art & Design
References: theomoeller.de & dezeen
Share on Facebook Share on Twitter Share on LinkedIn Share on Pinterest
In the creation of his BLOW lamp series, Theo Möller describes that it was his goal to "use the heat of bulbs to let a lamp fly." Although this sounds pretty ambitious, the unusually buoyant lighting system is simple, consisting of inflatable tubes and LED strips.

With polyethylene tubes acting like balloons, the lamps start as flattened rolls that can be blown up into floating light sources. The lights themselves come from small LED strips, which are placed so that there are no safety hazards. The light strips are nothing substantial, but the tubes have a metallic aluminium coating inside, which helps to amplify and reflect the light around a room.

Möller's range of BLOW lamps are available in lengths of up to 13', with the longest weighing in at just barely over a pound.
2
Score
Popularity
Activity
Freshness
Jeremy Gutsche Keynote Speaker