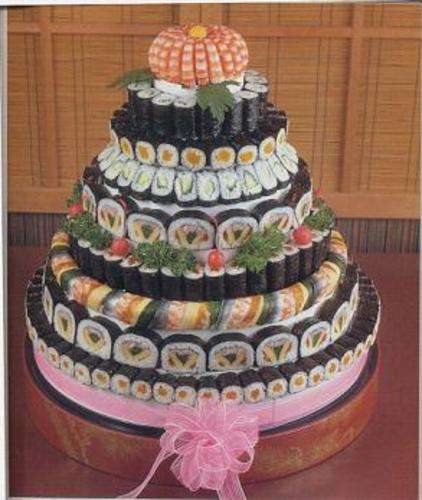 Cowbag — August 31, 2008 — Fashion
References: etsy
Share on Facebook Share on Twitter Share on LinkedIn Share on Pinterest
Sushi is one of those foods that, to me, looks a lot better than it tastes. I can’t be alone in thinking that it's visually enticing; it has inspired the designs of many inedible products. The gallery shows 10, and below are 7 previously featured on Trend Hunter.

Sushi Wedding Cake - That’s a whole lot of fish. Looks even better than the pork pie cake a couple in the UK had made.

Sushi Hat (collection of) - Absolutely bloody brilliant. What else is there to say?

Sushi Wind Up Toys - If you want to break your sushi free, then just wind these up and let them go. Good for annoying cats.

Sushi Shower Curtain - Kind of a link that makes this work - Sushi is made from fish, fish swim in water, you get wet in a shower. But isn’t a novelty shower curtain a bit 80’s?

Sushi Candle - Too good to burn! Surely the point of novelty candles is that they look great, get covered in dust, never burn, then are thrown away five years down the line.

Sushi Fabric - I found this cloth diaper on Etsy. It is not so much the diaper that rules but the material.

Sushi Jewelry - Another Etsy find, this ring looks brilliantly strange. Necklaces, earrings and all the usual suspects can be found on Etsy.

Knitted Sushi - These are just way to adorable and the kind of kitch any kitchen should be proud to have. Not pictured as I ran out of room such is the amount of Sushi brilliance out there. See them here.

Sushi Dog Hat - Not the best recreation of sushi but SO worth a post. I don’t think I have seen a more pissed off looking dog for ages.

Sushi Beads - Great buy if you want to make your own sushi stuff. Somehow, the hairy seaweed works.

Sushi Soap - Would look great but would you ever want to use them? They are fairy small so surely after one use they would disintegrate and just be lots of annoying small pieces of soap.
3.6
Score
Popularity
Activity
Freshness
Get Better and Faster