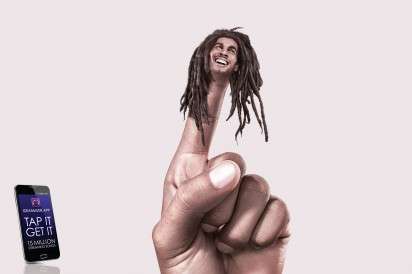 The Ideasmusik App Campaign Shows the Convenience of Streaming Music

Meghan Young — May 28, 2013 — Marketing
References: ibelieveinadv
Share on Facebook Share on Twitter Share on LinkedIn Share on Pinterest
The Ideasmusik App campaign appears to center around finger puppet portraits of famed musicians Bob Marley, Amy Winehouse and Kiss. Yet upon closer inspection, it becomes clear they aren't toys. Instead, the images have been photoshopped to illustrate the tag line, “Tap it, get it. 15 million streaming songs.” That means they will have these artists and more right at their fingertips.

Conceived and executed by Circus, an ad agency based in Lima, Peru, the Ideasmusik App campaign was art directed by Carlos Tapia Cabanillas with creative direction by Juan Carlos Gomez de la Torre. It shows just how convenient obtaining new and old music has become in this day and age. Shot by Sandro Aguilar and illustrated by Carlos Luna Gonzales and Cristian Moran, the images a hilarious and entertaining.
2.8
Score
Popularity
Activity
Freshness
Get Trend Hunter Dashboard