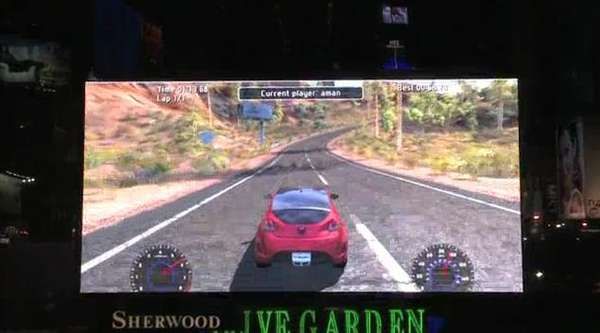 Katherinev123 — December 21, 2011 — Autos
References: hyundaiusa & brandingmagazine
Share on Facebook Share on Twitter Share on LinkedIn Share on Pinterest
Branded games are popping up everywhere and they also seem to be getting bigger, which is the case with the Hyundai Race game. This high quality racing game is currently being featured on a giant screen in New York City's Times Square.

In promotion of the 2012 Hyundai Veloster, the Hyundai Race game lets people walking through Times Square try their hand at playing a video racing game on a massive digital billboard. All one needs is a smartphone to access the Hyundai Race game; then, you just use your phone to steer the car, tilting it as you would a game controller. Your score and stats will appear on the giant screen after your race is finished.

The Hyundai Race packs a big punch when it comes to supersized advertising and branded gaming. As Steve Shannon, vice president of Marketing, Hyundai Motor America, says, "The game invites the audience to interact with Hyundai in the middle of one of the world’s busiest venues for commerce and tourism. It’s a great example of our innovative marketing at work."
4
Score
Popularity
Activity
Freshness
View Innovation Webinars