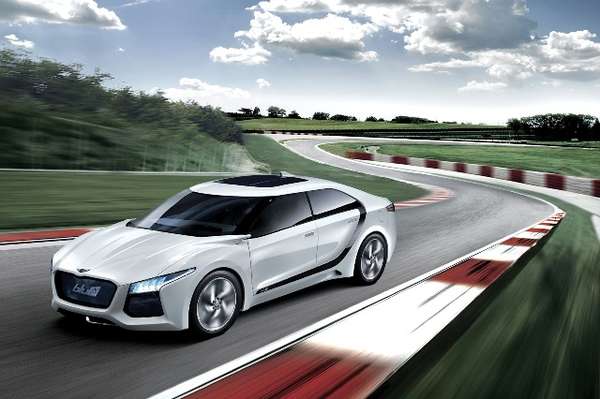 Michael Hines — April 2, 2011 — Autos
References: autoblog
Korean automaker Hyundai is set to unveil its latest car, the Blue2, at the upcoming Seoul Motor Show. You might be wondering what specifically makes the Hyundai Blue2 so special; the Hyundai Blue2 is a a hybrid hydrogen fuel-cell vehicle that is said to average around 82.1 mpg.

In addition to being eco-savvy, the Blue2 (pronounced blue squared) is also tech-savvy, boasting door video cameras instead of mirrors and LED panels in the front and rear displaying the car's current status. The interior has a slick design with curved headrests and blue LEDs everywhere. The car only puts out 120 horsepower, which means that it won't be winning any drag races anytime soon; still, I'd gladly end my Fast and Furious days to be able to seat five while getting 82 mpg.
2.3
Score
Popularity
Activity
Freshness