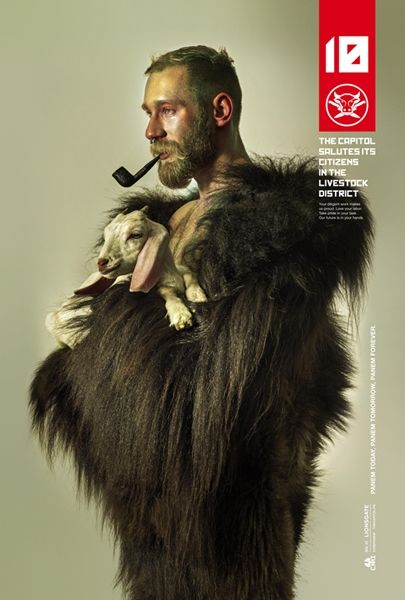 'The Capitol' Unveiled Photos That Honor the Hunger Games Districts

Megan Facciuolo — June 23, 2014 — Pop Culture
References: thecapitol.pn & designtaxi
Share on Facebook Share on Twitter Share on LinkedIn Share on Pinterest
The Capitol, a website in homage to city from The Hunger Games franchise, created a series of photographs that honor the heroes from different Hunger Games districts. The photos act as a series of propaganda posters and each one boasts a warrior from a district in Panem.

Titled ‘District Heroes,’ the series features stunning portraits of the people with their respective industry’s motifs. For example, the District 10 photo features a man holding a goat and wearing a fur coat, because his district is known for livestock, while District six, which specialized in transportation, is depicted with a person holding a tire.

Depending on the district, the photos portray an array of social statuses. Some people are poor and solemn-looking, while others are well-off and look proud and prestige.
5.6
Score
Popularity
Activity
Freshness
Access Advisory Services