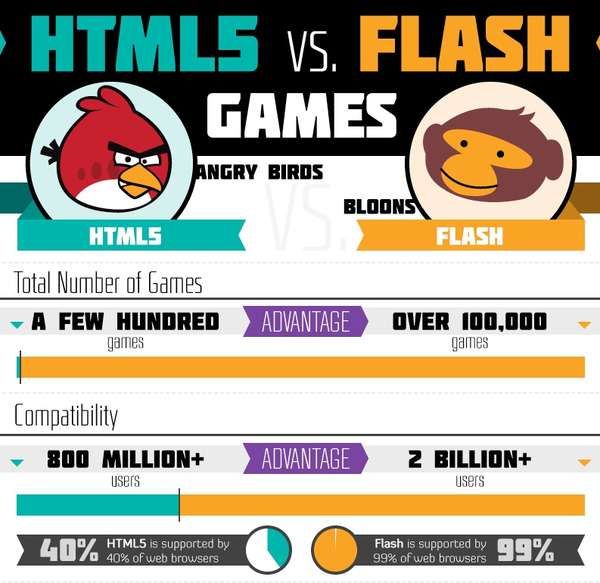 HTML5 vs Flash Games Breaks Down The Two Formats

Rebecca Byers — February 2, 2012 — Tech
References: onemorelevel & holykaw.alltop
Share on Facebook Share on Twitter Share on LinkedIn Share on Pinterest
The HTML5 vs. Flash Games infographic puts the two opposing formats against each other and breaks down the differences in a way that even the most non-technologically inclined can understand. For reference, Angry Birds is an HTML5 game, while Bloons is Flash. Created by _ , it outlines the advantages of each, security factors and adoption by Facebook. On Facebook in particular, the majority of the games are Flash, but many are being rewritten and developed to use HTML5 instead. On the other hand, Flash games are still a lot safer than HTML5 in terms of encryption.

The HTML5 vs. Flash Games infographic also touches on the Apple vs. Adobe controversy, and also provides a timeline of the two formats, which shows the expected growth and eventual success of HTML5 entirely.
4.4
Score
Popularity
Activity
Freshness
View Innovation Webinars

Championship Rivalry Infographics
Super bowl XLVI: a Legendary Rematch is a Guide by the Numbers

Piracy Protest Graphs
This SOPA Infographic Supports Those Against the Bill