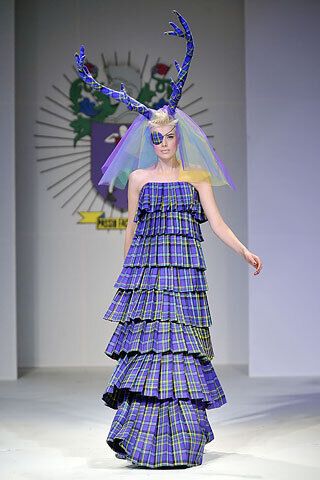 Bianca — February 14, 2008 — Unique
References: style
Share on Facebook Share on Twitter Share on LinkedIn Share on Pinterest
House of Holland had a really cool collection last season of which we featured the Model Attack Shirts. They've just shown their latest line at London Fashion Week, and the Fall 2008 pieces they showed were truly magnificent, while still heavy on the bizarre.

At first glance, you might wonder why the London fashion house isn't called House of Scotland. There was an abundance of tartan at Henry Holland's collection, many pieces of which were modeled by his partner in crime and muse, young model Agyness Deyn.

The collection featured several pieces that catapulted my memory back to the 90s when Clueless made the plaid uniform look popular, although Holland's collection was a lot more punk than preppy.

"This season, he mythologized their friendship in a fake coat of arms (in which the figure of Aggy is emblazoned on a shield), persuaded her into a pair of plaid antlers, and had the model and her friends rompout in a Highland collection featuring a mauve-and-yellow fake House of Holland tartan, specially woven in Scotland," Style.com reported.