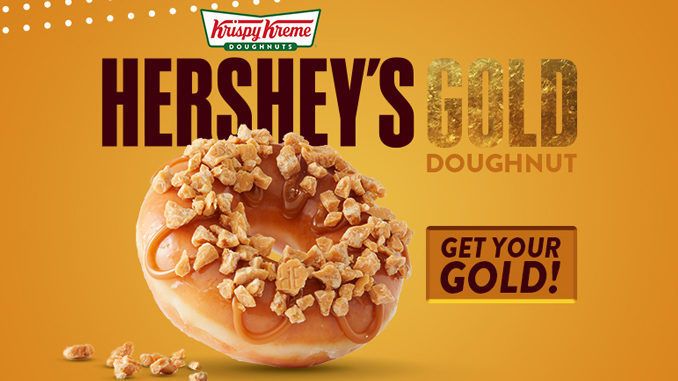 Katherine Pendrill — February 20, 2018 — Lifestyle
References: businesswire & chewboom
Share on Facebook Share on Twitter Share on LinkedIn Share on Pinterest
While the Olympics may be drawing to a close, Krispy Kreme wants to gave customers one last chance to snag a gold with the debut of its new Hershey’s Gold Doughnut. While ordering the new donut may not be the same as winning an Olympic medal, the tasty treat helps fans get in on the fun of the games.

The new Hershey’s Gold Doughnut is a limited-edition treat available at participating US Krispy Kreme locations. The donut itself consists of a Krispy Kreme’s Original Glazed Doughnut topped with a drizzle of salted caramel icing and pieces of the new Hershey’s Gold candy bar. The new bar consists of a caramelized creme base, salty peanuts, and pretzel bits, thereby adding a sweet, salty, and crunchy finish to the golden donut.