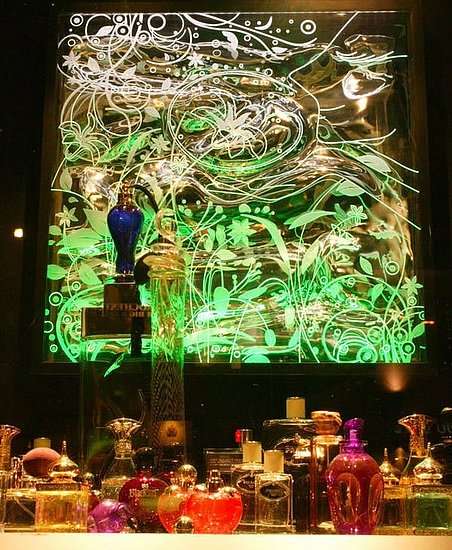 An image of a city skyline by night appearing to be under a dramatic storm evokes the senses of sight, sound and perhaps even touch, as one can almost feel the impact of the lightning, wind and thunder.

A second image looks to represent the sense of smell, as swirling shades of green and and white curl upwards from a perfume display.

Another image evokes taste; it shows hues of red with an image created out of thin, yellow lines depicting a woman tossing her head back in enjoyment as she eats what look like lemons.

Yet another is based on the sense of sound and sight, featuring a fireworks display, with swirling lines of orange and pink below, and deep purple in the region designated as the sky. Focusing just on sound is an a blue and turquoise image of headphones, with musical notes flowing around.

The display was created by Chilean lighting company, The Anemix, and will continue to be shown in the store until March 28, 2008 when the campaign ends.
4.6
Score
Popularity
Activity
Freshness
Get the 2021 Trend Report FREE