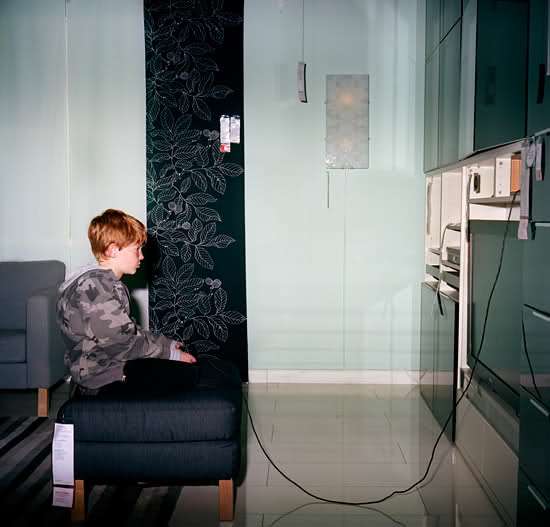 'Happy Inside' by Amy Lombard Captures Personal Moments at IKEA

Marie C. Hudson — February 22, 2012 — Art & Design
References: kickstarter & holyghostzine
Share on Facebook Share on Twitter Share on LinkedIn Share on Pinterest
The showrooms of the Swedish home furnishings store IKEA are home to a frenzy of activity, with families trying out sofas and beds, and every room so perfectly decorated that it's easy to forget you're not actually in a real kitchen or living room -- which is exactly what 'Happy Inside' by Amy Lombard captures.

The New York-based photographer began the photo project after visiting an IKEA in Brooklyn, and became interested in what she describes, "someone else’s idea of a staged reality." The incredibly detailed and constructed environments found in the store allow for shoppers to interact with the products in such a familiar way that when viewing Lombard's photos, one could easily mistake these for family photos -- save for the red price tags hanging from each item.

Photographing the IKEA shoppers in such a candid manner, Lombard perfectly captures both the eerie effect of simulated reality, and the odd experience of seeing humans adapt so quickly to artificial environments. Happy Inside by Amy Lombard is set to be released as a photo book in April 2012, with funding raised through Kickstarter.
2.3
Score
Popularity
Activity
Freshness
Get Better and Faster