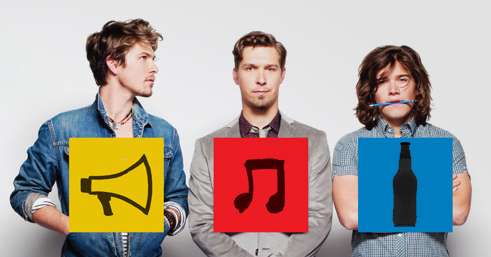 Katherinev123 — December 8, 2011 — Marketing
References: rollingstone & brandchannel
Share on Facebook Share on Twitter Share on LinkedIn Share on Pinterest
Fifteen years after the song 'MMMBop' took the world by storm, Hanson -- the blond boy group consisting of Isaac, Taylor and Zac -- will be releasing the Hanson 'MMMHop' India Pale Ale. This new venture by the trio who made teenage hearts flutter back in the late 90s will be released in early 2012.

The Hanson MMMHop IPA, as BrandChannel points out, is a clear indication that the fellows who once gave off the "nice boy" image are now men. In fact, the brothers have stated that they really didn't want to do what other boy bands did -- that is, make dolls out of themselves. Zac Hanson told the reporters at Oxford University Union that they will "never make dolls, lunch boxes or toothbrushes" that play their songs.

At any rate, naming the Hanson MMMHop IPA after the hit 'MMMBop' is a great way to piggyback off the success of the song, but the real question is, will this beer taste any good? I guess we'll just have to wait and see.
1.6
Score
Popularity
Activity
Freshness
Access Advisory Services