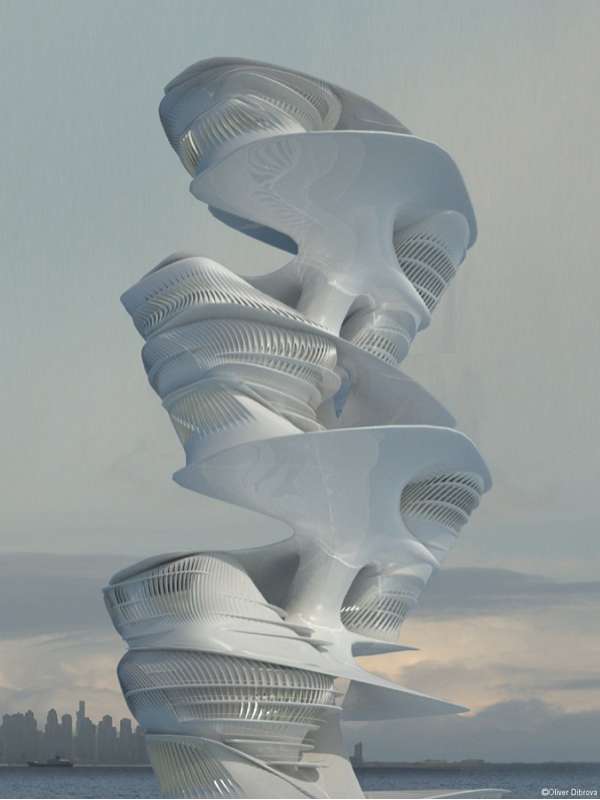 Katherinev123 — October 15, 2011 — World
References: oliverdibrova & evolo.us
Share on Facebook Share on Twitter Share on LinkedIn Share on Pinterest
There are some really amazing architectural designs out there, and this hybrid hotel in Dubai by Hani Rashid Studio is certainly one of them. Hani Rashid Studio's Barbara Leonardi and Oliver Dibrova designed this incredible tower concept, which features a spiraling body that is supposed to mimic the phenomenon of singing dunes found in desert environments.

According to Evolo, this skyscraper is a hybrid space, meaning that it contains different surfaces "representing different programmatic conditions." Essentially, the hotel has four targeted units that are independent from one another. For example, one is a hotel for recreation, featuring gardens, a spa and a theater; another hotel is for business only and has a conference room, a helipad and public offices. The tower also features a sports hotel -- with tennis courts, a running track and a fitness center -- and a city hotel that has a shopping mall, a "discotheque" and restaurants.
4
Score
Popularity
Activity
Freshness
Get Trend Hunter Dashboard