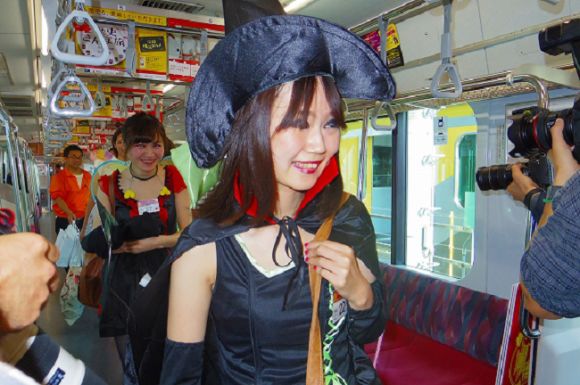 Laura McQuarrie — October 30, 2014 — World
References: otonahalloween & en.rocketnews24
Share on Facebook Share on Twitter Share on LinkedIn Share on Pinterest
There a lot of people who go to great lengths when it comes to putting together a costume, but a lot of the time Halloween costume contests are judged in dark settings where the details that go into them aren't always appreciated. This year, rail company Tokyu hosted a costume contest on a train from Yokohama, through Kawasaki to Shibuya.

Some of the amazing people in costume that showed up to the Shibuya Adult Halloween event on the train included witches, Alice in Wonderland playing cards, ghosts, ninjas and even a few Disney characters. In total, 105 people in costumes entered the event and a group by the name of Aoyama Cemetery Hills took home the grand prize. As well as being a fun Halloween activity, it's also a great way to promote sightseeing with public transit.