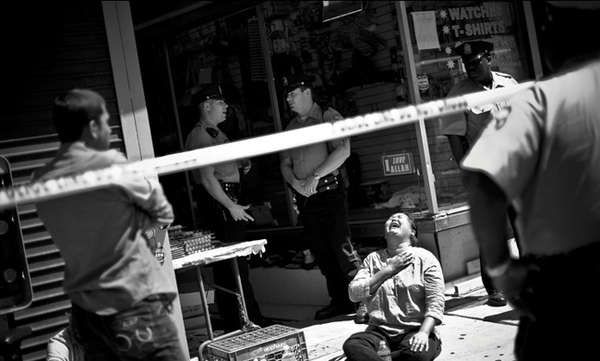 The 'Too Young To Die' Series Addresses Gun Control Issues

'Too Young to Die' actually began as a documentary for Ortiz, who travelled around America, interviewing and filming people who had lost loved ones to gun crimes. Instead, Ortiz transformed his project into a photography series which, since its release, has affected hundreds of people with its brutally honest depiction of emotionally distraught friends and families of loved ones who were killed by guns. Some of Ortiz's photos include a woman sobbing at a crime scene, two women hugging each other in front of a coffin, and police officers going to investigate an incident. The clearly unstaged aspect of these photographs makes them especially somber and effective, since it's clear that the subjects are not actors, but people who have been negatively affected by gun violence.

With this stunning photo series, Ortiz has proven that art can indeed help shed light on a cause. Hopefully, with time, photographs like these will be a distant nightmare.
1.9
Score
Popularity
Activity
Freshness
View Innovation Webinars