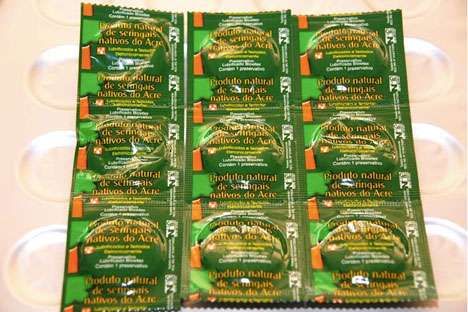 Green Johnny From The Amazon

Wessley Murylo — April 15, 2008 — Naughty
References: trendsandcuriosities.blogspot
Share on Facebook Share on Twitter Share on LinkedIn Share on Pinterest
Natex, a Brazilian company founded by the Public Health Ministry and the government of the federal state of Acre, will manufacture male preservatives from pure natural latex extracted from the Amazon rainforest in a sustainable and eco-friendly way. The condoms will be solely sold to the federal government for its national program to combat STD/Aids.

It is unlikely you ever will get a chance to use the â€œGreen Johnnyâ€, a male preservative based on eco-friendly extracted natural latex from the Amazon rainforest. Maybe when you ever visit Brazil during the carnival or one of the holiday centres you might be offered one of the 120 million condoms courtesy of the federal government of Brazil. Brazil's Public Health Ministry distributes the free condoms as part of its successful Health Programs to combat STD/Aids.

Up until now, the approx. 120 million condoms in Brazil are imported from China, South Korea and Thailand, made from cultivated rubber trees. That will change soon.

The expected initial production of the Natex condoms will be 100 million pieces a year. The factory, the only one in the world to use natural latex as raw material, will have a future capacity of 270 million condoms a year. The construction of the factory is based upon sustainable, social and environmental development.

Natex will create 150 direct jobs and employ 700 native families of the Chico Mendes reservation for the supply of the raw material. It is estimated that in the Amazon rainforest of Acre some 70.000 native rubber tappers are active.