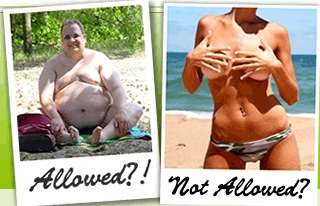 Sandra Winn — September 5, 2008 — Naughty
References: gotopless.org
Share on Facebook Share on Twitter Share on LinkedIn Share on Pinterest
Gotopless.org and their National Topless Day rally held on August 23, 2008 in Los Angeles is abuzz on the net this morning.  The group is a US based organization whose position is that women have the same constitutional rights, per the US Constitution’s 14th Amendment, to bare their chests in public as men.

The US Constitution’s 14th Amendment, Section 1, reads, in part:  “No State shall make or enforce any law which shall abridge the privileges or immunities of citizens of the United States…”  Gotopless.org postulates that the 14th Amendment protects the rights of women—including the right to go topless.

Women and the issue of going topless is a fascinating subject.  As we know, as humans evolved over the years, loss of hair was part of the process.  Clothing was simply needed to protect the dermis from nature’s elements. We didn’t begin to wear clothes because the human body was dirty, filthy, or obscene.  Specifically pointing to a place in time where women walked around in their natural form with their breasts exposed proved to be a hard area of research.  However, we do know that many ancient religions forced women to wear head coverings and fully clothe their bodies.  Fathoming a guess, I would say it more than likely stems from religion.

Unlike some European countries where topless women are seen on beaches and television, America is still heavily influenced by Christianity, so much to the point that even many non-believers have come to see women who want the right to walk around with breasts exposed as “wrong”—or, as in my case, just uncomfortable with it due to having such thoughts instilled since childhood.

In all actuality, if we really delve into this area a bit further, it is seen as dirty when viewing woman with European attributes, or any American woman or sexy woman regardless of race.  I have known, which may be your case too, many people over the years of both secular and religious persuasions, who have no problems watching a National Geographic documentary or other cultural show or magazine in which the breasts of tribal African women are out there for the world to see.

Gotopless.org basically wants us to know that so far steeped in our American mentality of female breasts being exposed as wrong in public, that even the beautiful and natural process of breastfeeding causes shock value if a bit of breast shows while a women breast-feeds her child.  We’ve even taken it further by rushing to cover-up the chest of young females who are not yet developed because society views their small innocent chests as “sexual.”  (Sadly, that same thing has played true in my mind as I don’t foresee myself, or husband, ever being comfortable seeing our young daughter walk around without a top)

Is it any wonder why Gotopless.org is so vehement when it comes to fighting for a woman’s right to walk around topless?  We can vote, but we still do not “own” our own bodies.  A man’s chest, when well defined, is something many women find attractive and sexy, yet we don’t try to cover them up or make them wear shirts in public—but if a woman does she chances being arrested.  Our society doesn’t put stars or black rectangles over a man’s chest in magazines, or when exposed on the net—yet they do for women.  Talk about out and out hypocrisy!  Eva Mendes’ Calvin Klein ad is banned in America because it is considered “too sexy.”  Halle Berry breast shots from the movie Monster Ball were censored too.  We cannot forget Janet Jackson and “Nipple Gate.”  What an outrage, how dare she expose her starry nipple!

Gotopless.org and National Topless day is about bringing all of those double standards to light.  Until we discard the mentality of naked breasts being dirty, we’ll only serve to hold back further process when it comes to the area of womens rights. The right to go topless will require baby steps, awareness being the first.  Our next step or hurdle to overcome as a society, would be to stop judging—hard for a society that seems to pride itself on telling everyone what is right and wrong, I know.  Once we can move past the judging and expose the hypocrisy of this entire issue, only then will we be able to move forward as a society and truly embrace equal rights for all.
6.1
Score
Popularity
Activity
Freshness
Access Advisory Services