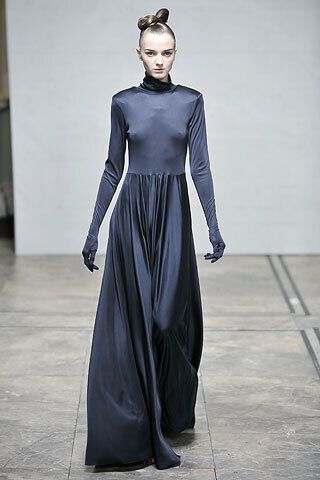 Tinkalicious — October 30, 2008 — Fashion
References: style.sky & vogue
Share on Facebook Share on Twitter Share on LinkedIn Share on Pinterest
In the past, Halloween was about the only time of year it was socially acceptable to “Go Goth” without attracting too many stares at the shopping mall. Maybe it’s a sign of the tough economic times, reflecting doom and gloom, but this year mainstream fashion has adopted the Goth style. Fortunately, designers aren't producing scary fashion, but rather a look being described as 'Soft Goth'.

The new take on a look that has been around since medieval times (or before), is redone today with dresses in maxi lengths, high necklines, ruffles, and flowing layers of chiffon. Although most of the styles appeared in black, the combination of lilac and gray lends itself to an equally effective and, I must admit, quite attractive, smoky look.

As seen at Rodarte, Givenchy, Yves Saint Laurent, Chanel, Viktor and Rolf, Giles, Roksanda Ilincic, Derek Lam, Bora Aksu, Termperley, Alber Elbaz for Lanvin, and Jens Laugesen, it’s safe to say this is a look that may last a while.

So even if your regular style is best described as preppy-chic, look for the fashion radar to pick up on this trend!
4.1
Score
Popularity
Activity
Freshness
Get Better and Faster