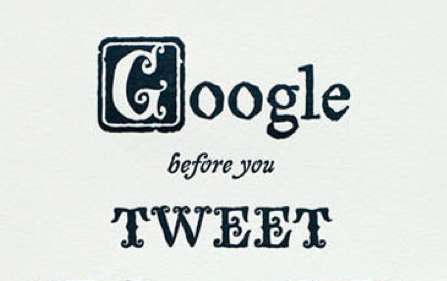 'Google Before You Tweet' Reminds People to Do Their Research

Made by Joe Newton of 'I Love Typography,' this limited edition poster is just one of 100 copies, costing a bargain $15. Worth much more as wise words of advice for all Internet users, this modern motto can be put to the test on Twitter, Facebook, blogs, and any website without an editor.

Executed in a more primitive method, the 'Google Before You Tweet' placard was created as a letterpress print in a calligraphic typeface by Randy Jones called Olduvai. Considering the universal truth behind this statement, how often do you come across a post that could have used this tip?
5.3
Score
Popularity
Activity
Freshness
Get Trend Hunter Dashboard