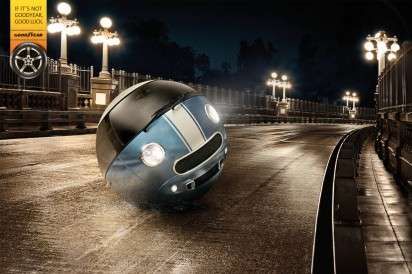 The Goodyear Campaign Shows That Not Using Their Tires is Dangerous

Meghan Young — June 8, 2012 — Autos
References: yr & ibelieveinadv
Share on Facebook Share on Twitter Share on LinkedIn Share on Pinterest
The Goodyear campaign may seem very comical at first, but the spherical cars depicted in the ads can have dire consequences for the drivers. Skidding and rolling all over the road, they are bound to crash into something, and there is no bouncing back from that.
Through these images, the Goodyear campaign shows that a person might as well be driving one of these vehicles if they aren't using Goodyear tires. It reads, "If it’s not Goodyear, good luck."