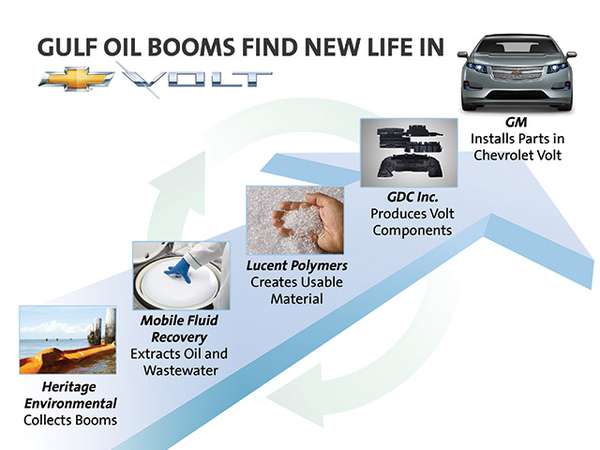 Katherine Vong — December 21, 2010 — Autos
References: brandchannel & mashable
Share on Facebook Share on Twitter Share on LinkedIn Share on Pinterest
General Motors has launched a social campaign to combat the after effects of the tragic Gulf of Mexico oil spill. The GM post-oil spill initiative is focused on recycling oil-soaked booms and using them as parts for its Chevrolet Volt.

The booms used to soak up the oil can be cleaned, processed and turned into Chevrolet Volt parts such as radiator air deflectors. According to Brand Channel, “more than 100 miles of boom, equal to 100,000 pounds of plastic resin that would have been dumped into landfills, are being remolded into usable parts.”

In addition to the GM post-oil spill initiative, the car company is also embarking on other green projects, such as making 50 percent of their factories “landfill-free” and recycling at least 97 percent of its waste.
0.5
Score
Popularity
Activity
Freshness
View Innovation Webinars