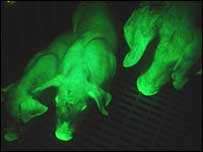 "A fluorescent green Chinese pig has given birth to two piglets which share their mother's transgenic characteristic after she mated with an ordinary pig," Reuters reported.

Only two of her 11 piglets have shown signs of glowing.

By day, they look somewhat normal, save for their eyes and teeth which look a little on the green side. OK, their skin tone's off by a bit too. But as soon as the lights go out, or when a blue light hits them, they radiate a vibrant emerald shade.

The transgenic piggies were made like the other genetically modified critter we've seen lately; that is, they were made by injected jellyfish DNA into 256 pig embryos which were implanted into eight sows. They're green inside and out; yes, even their lungs, stomachs and hearts and green.