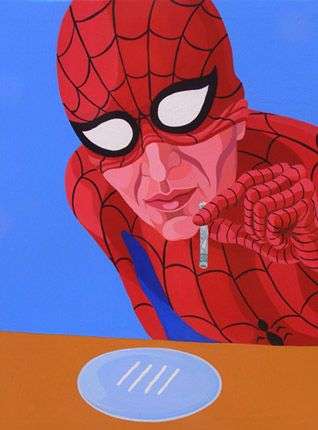 Milla Kiss — September 7, 2011 — Naughty
References: buzzfeed & art-2011.mylocalguide.org
Share on Facebook Share on Twitter Share on LinkedIn Share on Pinterest
Giuseppe Veneziano is a controversial Italian Neo-Pop artist who has been depicting the moral fall of popular idols. The series chronicles the New Brew exhibition, displayed in Venice during the 2011 Venice Art Biennale, and showcases his most recent works in which the spectators may observe the artist's bizarre surreal-real visions about superheroes, super-villains, politicians, religious leaders, pop culture icons and other public figures in the middle of their downfall.

Giuseppe Veneziano's pieces raised intense criticism for addressing religious, historic and political themes in a very direct way. His provocative, and to some observers shocking, Zeitgeist series created a heated debate about the role of contemporary art.

Thought-provoking or just provoking? One thing is for sure, surreal is becoming real, and an art gallery is not necessarily the only place to see fallen public idols.
5.7
Score
Popularity
Activity
Freshness
Get the 2021 Trend Report FREE