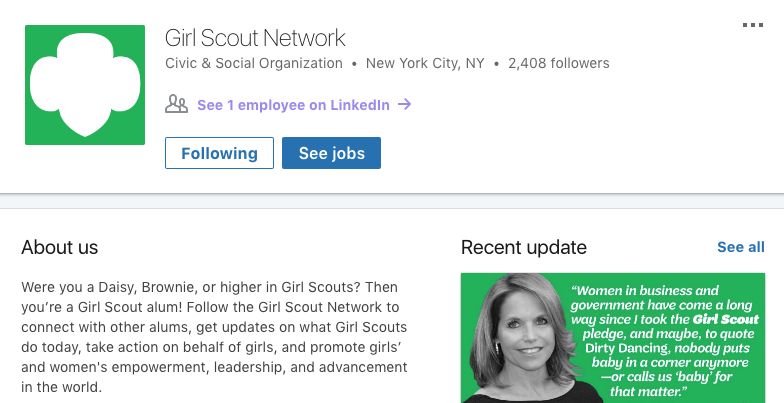 The Girl Scouts Network Helps Alums Reconnect and Help One Another

Justin Lam — April 9, 2018 — Life-Stages
References: prnewswire & mashable
Share on Facebook Share on Twitter Share on LinkedIn Share on Pinterest
Staying in touch with childhood friends can be incredibly difficult, but the Girl Scouts of America are hoping to make finding old friends easier with its Girl Scout Network. The network is being created in collaboration with LinkedIn and is meant to be a hub for alums to receive updates on the organization, reconnect with former troupe members and advocate for women's empowerment. The Girl Scouts will also be using the network to analyze public data from former scouts to identify career patterns and leverage those insights to inform programming for younger Girl Scouts.

The Girl Scout Network began as a pilot project in 2017 but has since grown to include over 2,400 members. In its current state, Girl Scout alums can "follow" the network on LinkedIn and make connections with other alums on the network through likes and comments on posts. The group hopes to develop sub-groups in the future, to inhibit more professional connections but will adhere to LinkedIn's privacy policies. The hope is that the Girl Scout Network will not just be a hub for rekindling friendships, but will also serve as an "opportunity to support, encourage, and help each other."