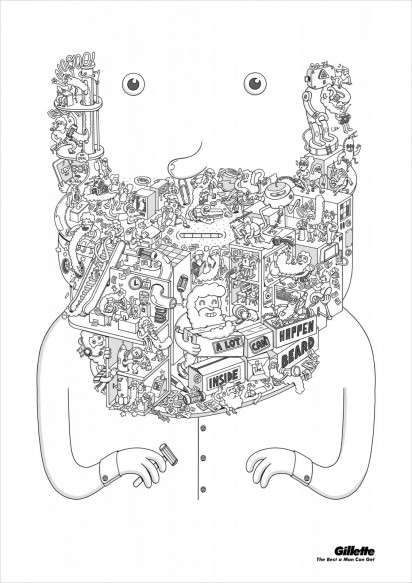 Meghan Young — September 27, 2012 — Marketing
References: bbdo & ibelieveinadv
Share on Facebook Share on Twitter Share on LinkedIn Share on Pinterest
As its tag line reads, the Gillette 2012 campaign shows that "a lot can happen inside the beard." It literally illustrates this point by revolving around some very busy beards. Like a 'Where's Waldo' drawing, the print ads are a mess of various activities that the bearded men partake in. It is somewhat hard to tell at first, but the men are different, with differing hobbies and everything.

The Gillette 2012 campaign was conceived and executed by the BBDO ad agency branch based in New York City, United States. It was art directed by Raj Kamble with creative direction by Raj Kamble and Paul Vinod. To promote "the best a man can have," the Gillette 2012 campaign was illustrated by talented artist Brosmind. Fun and minimalist, despite the crazy drawing, the campaign will capture people's attention.
3.8
Score
Popularity
Activity
Freshness
Get Better and Faster