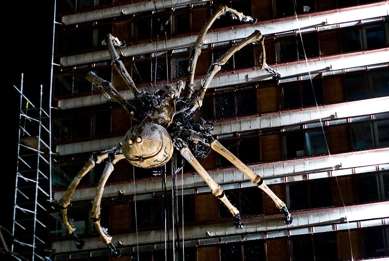 La Princesse Webs Her Way Across the Globe

Katie Cordrey — February 23, 2009 — Art & Design
References: lamachine.fr & boston
Last Autumn, Liverpool was visited by a giant spider dubbed La Princesse. It was a project sponsored by the city and designed by La Machine. Photos of it have started appearing in greater numbers around the Internet and Caroline D posted on boston.com, “It’s supposed to be coming to Antwerp, Belgium this summer. If you want to follow up, check http://www.zva.be (later this year though...)”

This may actually be true. A similar previous project, the Sultan’s Elephant, went from Nantes and Amiens, France in the summer of 2005 to London, England in late summer 2006 to Antwerp, Belgium in the mid-season. Events for the 2009 Summer of Antwerp event are not yet published, but it would seem a natural destination for the steampunk arachnid.

It is scheduled to visit Yokohama, Japan from April 16-19, 2009 and dates are pending for the cities of Calais and Madrid.