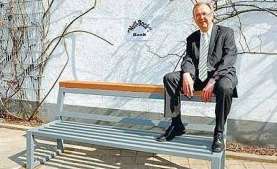 Eppelheim residents had been complaining about the bench etiquette of the city's teens, claiming that their preferred method of sitting on the bench's spine dirtied the actual seat. Moerlein took these complaints into consideration, and perhaps created the ultimate bench compromise in the No Interest Bench.

Since teens had no interest in partaking in bench etiquette, this new bench would cater to their needs. The new teen-friendly seat has a backless ledge running across the top of the bench. The teens can perch atop this bench, and rest their feet on what used to be considered the seat of the structure. Eppelheim teens will now have to seek new methods of rebellion since their badass bench etiquette has been embraced by their parents. (Totally uncool.)

Word of this brilliant bench is spreading throughout Germany quickly, and Moerlein is encouraging other cities to build their own versions of the teen-friendly seat.
3.2
Score
Popularity
Activity
Freshness
Attend Future Festival Virtual