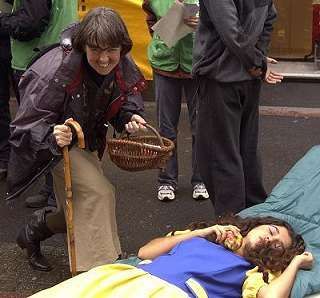 The decline of print media is being seen in Europe as well, which is why magazines are doing more to promote their online components. To celebrate the launch of regional online editions of Eltern magazine in Hamburg, Munich and and Berlin, G&J released promoters dressed as 15 famous characters including Snow White, Puss in Boots and Rapunzel. They handed out informational fliers at subway stations, specifically targeting young parents.

The city sites offer a range of fun ways to connect with the family on a daily basis, as well as listings for schools, pediatricians, and a range of range of local activities. There are also forums where parents can make recommendations and give tips for others parents in the area.

The photo is from a different Green Peace guerrilla marketing campaign, but I thought it was fitting for this article.