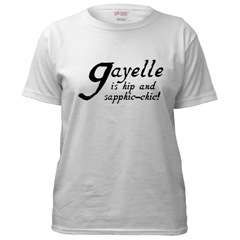 Lauren G — March 2, 2008 — Naughty
References: sapphicchic
Share on Facebook Share on Twitter Share on LinkedIn Share on Pinterest
A group of lesbians unhappy with their title have launched a world-wide movement to change the name of their sexuality to "gayelle" due to a "persistent distaste for the word lesbian" which they argue has now become derogatory. They argue "the word lesbian is antiquated; it is not representative of modern times, and or, of persons with modern views. Lesbian does not sound cheerful and fun, nor does it mean merry, like the word gay does; rather, it sounds more like loner, loser, and less. Gay females deserve more, not less".

Gayelle, denoting anyone gay and female, is made up of the words "gay" and "elle" meaning "she" in French. "The invention of â€œgayelleâ€ is with the idea and hope that it will have a worldwide appeal, and ultimately, supersede the word lesbian; a suitable replacement is necessary for positive language and the healthy self-esteem of the gay-female-population," the website states. Theyalso argue that gay does not aptly reflect their sexuality as it has become associated specifically with homosexual men.

If you support the gayelle movement, then you may choose to shop gayelle: perhaps a tee for yourself or your dog? or a teddy for your special someone?
2.5
Score
Popularity
Activity
Freshness
View Innovation Webinars