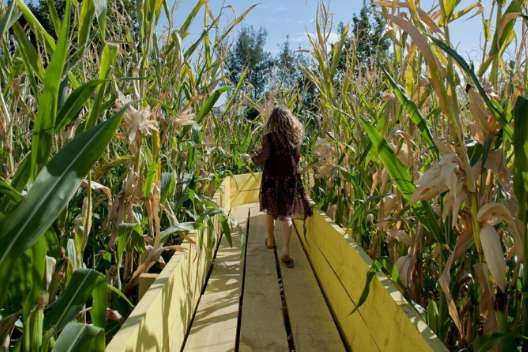 The 'Garden of Forking Paths' Gives the Opportunity to Slow Down

Jennifer Gosnell — June 30, 2013 — Eco
References: good.is & archilovers
Share on Facebook Share on Twitter Share on LinkedIn Share on Pinterest
The 'Garden of Forking Paths,' winner of the 2013 Young Architects Program at MOMA, was created by Beals + Lyon Architects, by the team of Alejandro Beals, Loreto Lyon and Claudio Viñuela. The stop-and-think architectural wonder was built in downtown Santiago, Chile, as a temporary park structure.

The maze offers tourists and locals alike the chance to slow down and enjoy the city life. "We create an environment of slowness; a new scale for leisure and the unforeseen in a park that is otherwise insistently being pushed and transformed into a productive and lucrative space," comments the architectural team on Archilovers.

The Garden of Forking Paths features neon beams, a fountain and corn stalks. This creative project utilizes the busyness of the city to offer a stark and fun contrast that will overjoy children and adults alike.
5
Score
Popularity
Activity
Freshness
Get Trend Hunter Dashboard