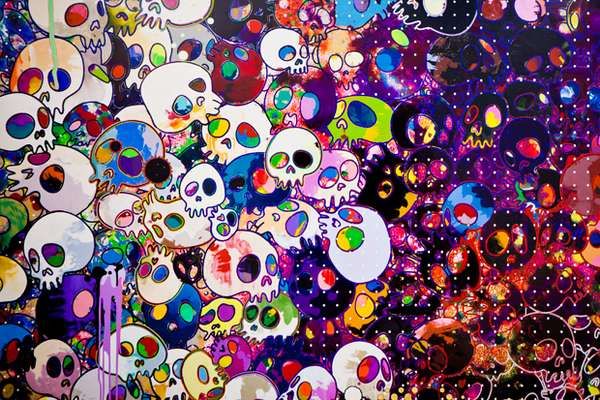 Jordan Sowunmi — May 27, 2011 — Pop Culture
References: gagosian & bkrw
Share on Facebook Share on Twitter Share on LinkedIn Share on Pinterest
The latest exhibit from Japanese art legend Takashi Murakami is currently on display at Hong Kong's swanky Gagosian Gallery. The incredibly prolific master of contemporary fine arts, Murakami, is known for his ability to repurpose ideas from mass media and pop culture and creating memorable, visibly arresting sculptures out of them.

For his latest exhibit, currently on display at the Gagosian Gallery, Murakami's art reflects heavily manga-influenced animals and skulls. He is clearly at home when mixing an inordinate amount of colors in one painting, as he displays in his skull piece. The eye-catching piece is detailed enough to draw even the most casual art observer into its brillant abyss.

The Gagosian Gallery in Hong Kong is a major tourist attraction and Murakami's latest exhibit only further enhances that reputation. Exhibits like this seem to be a part of a larger plan for Murakami, who is set on affecting the culture in which we live.
5.8
Score
Popularity
Activity
Freshness
Access Advisory Services